The aorta is the main artery in the body which leaves the heart and passes through the chest and abdomen giving off many branches which supply blood containing oxygen to the body’s organs and limbs.

The aorta is the main artery in the body which leaves the heart and passes through the chest and abdomen giving off many branches which supply blood containing oxygen to the body’s organs and limbs.

The aorta is normally about 2.0cm wide, but its wall can become weakened and bulge out like a balloon, which can occasionally blow, resulting a major internal bleed. Bulging of the aorta is called an aortic aneurysm and occurs due to high blood pressure, high cholesterol, smoking, a split along the length of the aorta (called a dissection), infection or inherited conditions passed on from your parents.

As the aortic wall becomes weaker, the aneurysm increases in width and the wall becomes thinner until pain develops or the aorta bursts (or ruptures) often with little warning. Rupture causes bleeding into the abdomen or chest and is usually fatal without an operation to repair the aorta.

Aneurysm repair can be done either by open surgery or key-hole (endovascular) surgery. Open surgery involves making a large cut in the abdomen and/or the chest under a general anesthetic to expose the aorta and replace the aortic aneurysm by stitching in a piece of artificial tubing. When an aneurysm is below the size threshold for repair, you will require careful management of the known risk factors for aneurysm growth and rupture and regular check-ups and scans to monitor any enlargement. 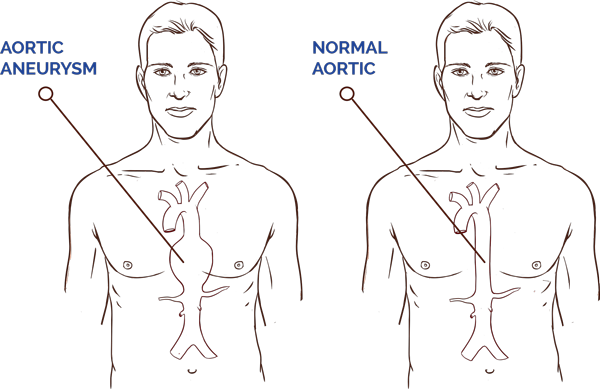 “Mr. Claridge and his colleague were most welcoming, informative, and proactive in the treatment of this ulcer and I would not hesitate in seeing them if I have any further ulcers and indeed would thoroughly recommend Premier Vascular to anyone who has ulcers. Don’t just wait around and hope they will heal on their own, get specialist treatment from Premier Vascular and put your mind at rest.”

At Premier Vascular, we can repair the aneurysm either through ‘open’ surgery (which involves an incision in the abdomen and/or chest) or using the key-hole approach or endovascular repair (EVAR for short) which is our preferred method because it is less invasive and you will recover more quickly with a lower risk of complications. The operation is usually performed through two small incisions in your groin under general anesthetic. A device called a stent-graft (which is a metal scaffold tube covered with synthetic fabric material) is inserted through the arteries in the groins into the aorta under x-ray guidance. The device is positioned accurately and expanded so that it relines the aorta on the inside sealing above and below the aneurysm. In this way, the blood flows through the stent-graft device, rather than the aneurysm, and this relieves the pressure on the weakened wall of the aneurysm, so reducing the risk of rupture.

After successful repair of your aneurysm, you will be kept under careful review with regular check-ups and scans to make sure that you and your aorta stay healthy. Most aortic aneurysms occur in the abdomen and start below the level of the arteries that feed the kidneys. These aneurysms can be repaired using standard stent-grafts.

Some aneurysms, however, involve the area of the aorta where the arteries that feed the kidneys and intestines arise. These aneurysms can be repaired with special made-to-measure stent-grafts with windows (fenestrations) in the graft material or small branches which ensure that blood continues to flow to the kidneys and intestines while sealing off the aneurysm. These devices are known as fenestrated or branched stent-grafts and are a more advanced type of endovascular repair that the standard stent-graft.

The specialists at Premier Vascular have considerable experience in caring for patients with the most complex aortic aneurysms. We will provide a tailor-made treatment for you and your aneurysm, employing the most advanced available technologies in order to deliver the best possible outcome with the lowest risk of complications and the earliest return to your normal activities.